The following data came from a couple of local fishing books and reports from the Western Pacific Regional Fishery Management Council but, one thing you should know is that fish don’t know how to read calendars.

Like party guests, they don’t always show up when they should and sometimes they still hang around when they’re supposed to leave. The best fishermen in Kona will alter their target species with what will give you the best chance of a successful fishing day. I have the best catch rate of any charter captain in Kona every year since 1997 by doing it this way!

If I’m already booked up, I refer captains/boats that have a higher than average catch rate. 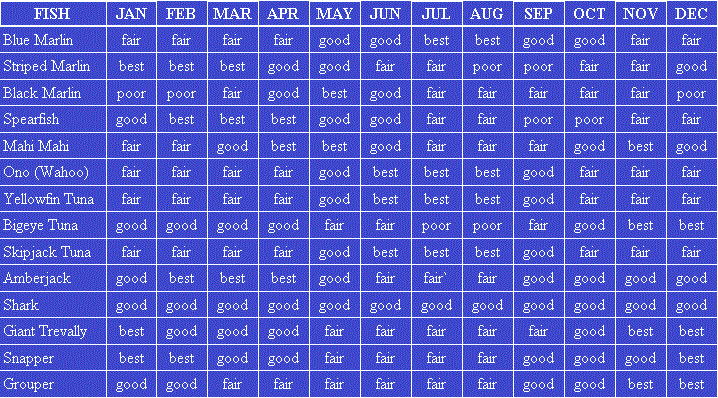 So what fish should we target?  My answer, whatever is biting. Some people have the notion that we can target some fish and not others. We can but only to a very limited extent. When trolling lures close to shore (called ono lane) you are pretty much just targeting ono but sometimes mahi mahi are found there too with the occasional sailfish, tuna or black marlin. When trolling lures further offshore, the targets are marlin, spearfish and mahi mahi with the occasional “blind strike” ahi (yellowfin tuna). When trolling around one of the FAD’s (Fish Aggregation Device), you’re basically targeting the smaller ahi, bigeye and skipjack tunas and sometimes the mahi mahi are there too. Marlin and spearfish are also a possibility. Fishing the deep ledge is almost the same as fishing a FAD if the current is going in the right direction. If you’re fishing in a porpoise school (they’re actually spotted dolphins), your main target is ahi but again, there are other fish swimming around too.

Kona is the Pacific blue marlin capital of the world. At times (not determined by the calendar) marlin are the most common daily catch here. The “daily average” of a good charter boat that goes trolling big marlin lures all day (most boats only troll) will “average” just under 1 marlin in every 4 days of fishing. The way this “daily average” works is misleading. The average is based on the number of marlin caught in a year divided by the number of days fished in a year. Multiple marlin caught in a single day brings that “daily average” up but in reality, is it a “daily” average? When the Kona marlin bite is “on”, you might catch more than one marlin in a day. The bite is considered “on” when 50% of the boats going out are catching marlin. When the marlin bite is “off”, you might not see a marlin for several weeks. A good blue marlin run can happen for a short period of time in any month of the year. The Striped marlin are here in the winter (not always) and are a rare catch in the summer months but not unheard of. Black marlin are rare with less than a dozen caught a year here. Sailfish are rare too but do show up from time to time. Spearfish show up in big numbers here and are one of the best eating fish there is. In general, if you plan on trolling for billfish all day, unless the bite is “on”, also plan on not catching any. The statistics are not in your favor. Some anglers have tried for years and haven’t caught a billfish yet. It is a gamble though so first time winners happen all the time.

Mahi mahi (dolphin fish) and ono (wahoo) can be caught year round. Use the chart above for peak season(s) but again, the runs may not happen according to the calendar. Ahi (yellowfin tuna) are also caught year round with the peak season for the big ones being the summer time but as mentioned above, fish don’t know how to read calendars. Working a porpoise school (if you happen to find one) any time of year is a way to target the big ones. The smaller yellowfin, skipjack and sometimes bigeye tunas are common around the FAD’s any time of the year. When the current is pushing North, the deep ledge on “The Grounds” also holds the smaller tunas and the big predators. The “big” bigeye tuna are an uncommon catch here. Skipjack tuna are the most common fish we have. At under 10 lbs., they’re considered bait fish here. Once they reach over 10 lbs. they are called “otado” or “otaru”. When properly bled and iced, they’re a good eating fish. Pacific skipjack is the most commonly consumed tuna is the U.S. in the form of “Chunk Light” canned tuna.

When bottom fishing, the targets are mainly amberjack, almaco jack (neither related to skipjack tuna), giant trevally and a variety of sharks and there is no way to target some but exclude others. All of these are hard fighting sport fish, not eating fish due to ciguatoxin. Snapper and grouper are more of a bycatch while targeting the bigger game bottom fish and those are perfectly fine to eat. There is a wider variety of fish swimming on the bottom than on the top. Sometimes some strange catches are made.

In some areas of the world, tides and moon phases are the most important factor when choosing your fishing day(s). Here in Kona, the current is king! There’s no way to predict it. When it runs steady (North or South), the bite is usually good unless it’s running too fast. When it switches, the bite drops off. Sometimes we get a split current and it’s going South, South of the harbor and North, North of the harbor. Or that split can happen anywhere along the coast line. We only get an average of a 2′ tide change here so it’s not much of a factor. New moons and full moons can make the bite better but the current often cancels or enhances this effect.

I hope this information is useful to you. I do the Kona Hawaii fishing report near the end of each month. At the bottom of my fishing report page you will also find over a decade of archived reports so if you really want to zero in on what the fishing might look like during the month that you’re here, have at it.