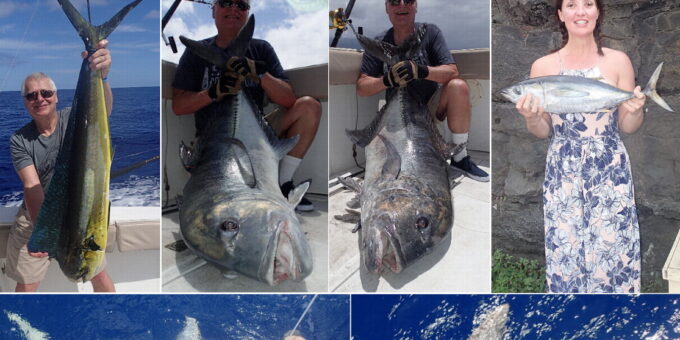 Tourism numbers continue to ramp up even with the Covid restrictions. One guy that wanted to fish with me called me up because it was getting close to his flight time and he still hadn’t received his negative Covid results. He asked how strict Hawaii was about the 10 day quarantine. In other words, he thought they could just act like normal tourists and not get caught. Absolutely NOT! “Don’t even try” was my advice. Luckily they got the results just in time to make their flight (we fished and caught plenty) but their story is a common one.

The test is only good for up to 72 hours and some places won’t guarantee the test results in less than 3 days. Well? Find a place that will! The local authorities are not taking this lightly.

More and more blue marlin are showing up and the official blue marlin season basically starts now so things are looking good. It’s still spearfish season and the bite on those for April was pretty good. It’s also time for some black marlin to show up as May is the peak season for them.

It’s now both mahi mahi season and ono season. Currently ono seems to be the most common catch in the harbor. It’s also the start of “blind-strike” ahi season. Every year at this time we start seeing a random and single BIG splash on the water. That’s a 100+ lb. ahi coming up from down below to eat a fish swimming near the top. If you’re in the right place, at the right time, it could be your lure that ahi has its eyes fixed on.

The bottom bite was very good to me this month. Getting fresh bait was often harder to catch than hooking up sea monsters from the deep. It’s near the end of giant trevally season but there’s more of those around now than at the peak season. There are also a lot of sharks in the same area so getting smaller fish from the bottom to the top has been a challenge.

My bookings for May are almost filled up and the rest of the summer is filling up fast. It looks like I’m done getting that free government income for staying home. It’s time to get back to work fulfilling people’s dreams of catching the BIG ONE in Hawaii.