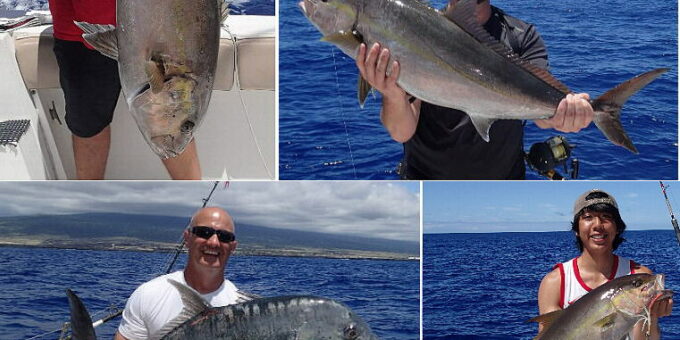 In sharp contrast to last months report, the big marlin moved into Kona. I said in last months report that it was possible that no “keeper” marlin would be caught during the 5 day Hawaiian International Billfish Tournament but the same day I wrote and published that report, a keeper was weighed in at 429 lbs. That was the only keeper for the whole tournament. But things got better from there as August started. The big ones started being caught on a more regular basis and in the middle of the month during the 3 day Big Island Marlin Tournament, “keepers” were caught every day and on day three, that keeper weighed in at 1035 lbs! That’s the first “grander” that Kona has seen since 2015. In 2015, there were 4 granders caught in Kona. I have to do a disclaimer here though for the people who don’t know what it takes to land a really big marlin. Most big marlin win the fight! It’s not like no granders have been here and hooked up in the past few years, it’s just that the fish just won the fight. Most of the marlin around right now are between 100 and 200 lbs. and there’s been plenty of them. Some spearfish have been caught also.

The tuna bite remained pretty much the same as last month with the blind strike ahi still happening. The smaller ones, below 20 lbs. are getting more frequent around the ledges. Out at the fish farm, any size is possible. It’s the biggest FAD Kona has. Just to mention, FAD VV broke loose so don’t bother looking for it. The otaru tuna bite is doing OK as is the ono bite.

Even with the trolling bite doing pretty good, I still like to mix it up during the day with some bottom fishing when I can. Even when the trolling bite is pretty good, you can still come home without a single bite (that happened to me this month) but the bottom bite is almost a guarantee to catch. Amberjack, almaco jack, giant trevally and sharks are my main target. I know these are all sport fish to be released rather than the many kinds of snapper we have here but most of the customers I take out have never caught a big fish. Yes, small snapper are good eating but going back home with “the biggest fish I ever caught in my whole life!” story seems much more rewarding.