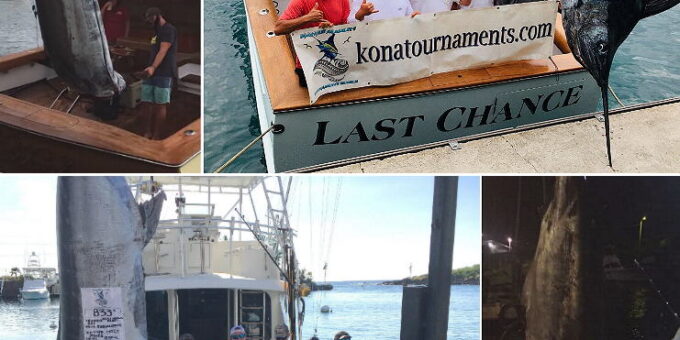 Most of Kona noticed that there were a bunch of charter boats out fishing this month even though we still have a 14 day quarantine for the tourists. So how does that compute? That’s because the boats out fishing were the gamblers. 4 tournaments with 11 days of fishing with some pretty big money to be made for the winners. It’s also some big money to even get in so that left me out.

The Firecracker Tournament had the most boats and there were several small marlin tagged and released during the 2 day tournament but there were no big marlin seen and several boats saw no action at all. That all changed with the 3 day Kona Throw Down Tournament. Almost every boat in that tournament caught and there were 4 marlin that were big enough to qualify for a weigh in. 411 lbs., 642 lbs., 672.5 lbs., and 765.5 lbs.

There was a lot of excitement for the 3 day Skins Marlin Derby now that the big girls showed up. Again there were several small marlin tagged and released but this time only one big one. 833.5 pounds! Then came the 3 day Big Island Marlin Tournament and again, several small marlin tagged and a 589 pounder was weighed in. There were a bunch of 100+ lb. ahi tunas caught in each tournament. Tagging a couple small marlin didn’t put you into any money but every ahi caught was a bonus that might earn some tournament money but even if it didn’t, you could sell ’em at the market or you and your friends can eat a lot of fresh sashimi.

The state of Hawaii got slammed hard with a 10 fold surge in Covid 19 infections this month. Hawaii went from being one of the best prevention models to one of the worst in just a month. So that means no quarantine restrictions will be lifted any time soon. Most of the infections were on Oahu so that island is under Stay-at-Home orders. Maui had the 2nd most cases in the islands until recently. The Big Island has now surpassed Maui to be #2 in the islands. That sucks! For people here that have “underlying conditions”, that’s scary news.