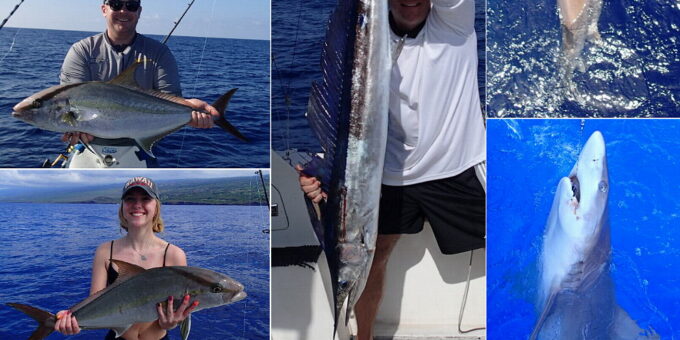 There’s been some ahi around along the ledges but it’s hard to get them to bite. The same is true with the otaru tunas. It’s bigeye tuna season now but I haven’t seen any around. Mahi mahi season just ended but there are still some stragglers to be caught.

The bottom bite has been good but only if I could get to the good fishing grounds to do that. We had several high wind days in December and that sometimes makes the seas too rough to fish in the prime areas so I’m forced to fish in less productive but calmer waters. January and February are known to be our rough water months and sometimes it’s even too rough to go out at all. Some people don’t mind getting pounded by the ocean all day but as a general rule, tourists prefer the calmer ride. I kind of a fan of the calm ride myself.

See ‘ya on the water,
Capt. Jeff Rogers,
http://FISHinKONA.com