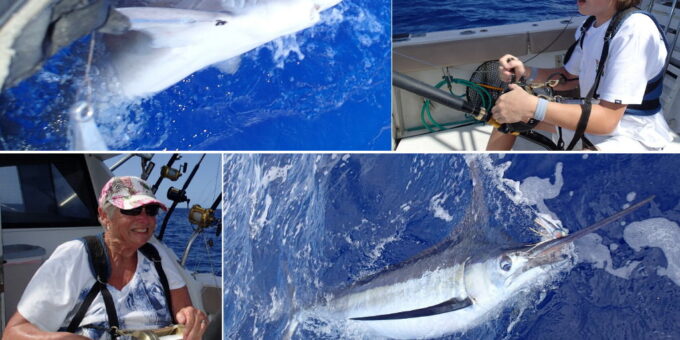 Just a decade ago, if someone would have suggested that one day soon there would be more snorkel and dive boats going out per day than fishing boats, they would have been laughed out of the harbor. But here we are. The snorkel and dive boats are pretty busy but few charter fishing boats are moving. It boils down to competition for the tourist dollar and it’s been trending in that direction for some time.

There was a time when you needed to get ‘certified’ to be able to scuba dive. Then a thing called an ‘intro dive’ was created so it’s real easy to go scuba diving for the first time. For snrokelers, not only can you go to popular spots not readily accessible from shore but you can swim with the spinner dolphins and swim with the manta rays. A decade ago, those two activities really didn’t exist.

I’m not ready to trade in my rods, reels and lures for mask, snorkel and fins just yet. The thrill of the hunt and my ability to often put people onto the biggest fish of their lives is still one of the best jobs a person could hope to have. The big problem now is that job has become very part-time employment instead of full time employment. Fishing only a couple days a month won’t pay the bills and the Covid relief payments I’ve been getting are running out soon. I’m hoping that tourism will be back to near normal by this summer because that will give me a fighting chance.

With only 2 trips this month, there’s not much to report. On one trip, I couldn’t find any fish. That happens when hunting sometimes. The next trip made up for it. Dropping two baits to the bottom resulted in two quick hook-ups. Both were sharks. The first one pulled hook several minutes into the fight. The next one, at about 120 lbs. was foul hooked under the pec. fin. That’s a hard way to bring in any fish.

We had a good size blue marlin come in and do some light lure taps but it was really uninterested in taking one. Then we did find one willing to attack. We caught and released a 170 pounder. During the fight, another blue marlin came in swimming between the boat and our hooked marlin, checking out the activity that was going on. We trolled the area for a couple more hours after, hoping it was still around but then it was time to head home.

Hopefully I’ll have more to report on next month but so far, it’s not looking very promising.