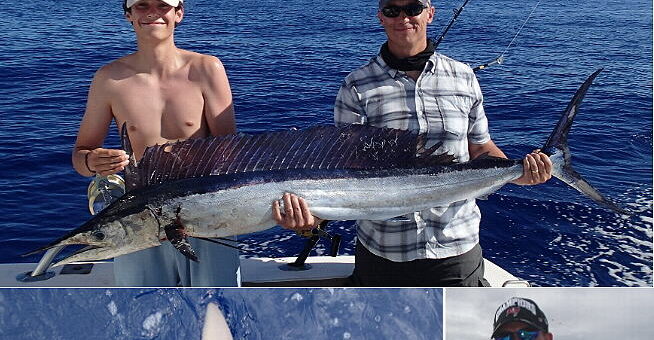 With a lot of tourists in town, there are also a lot of boats out fishing. One thing that stood out for July was the lack of marlin flags. For this time of year and the amount of fishing effort, it’s obvious that the marlin bite isn’t very good right now. Very few spearfish around.

The ahi bite has finally reached Kona! While the other islands have been experiencing a really good ahi season, they just didn’t seem to be this far South until lately. The smaller skipjacks are hanging on the ledges but no big ones around.

Ono remains the top catch in Kona. It’s been several years since we’ve had a run this good for this long and with all of the tourists around demanding fresh fish to eat, we’re getting a good price for them.

The bottom bite has been quite fickle. The problem is an abundance of small junk fish chewing up my bait before a big fish has a chance to grab it. Sometimes the small fish are so thick; it’s like throwing meat to piranha. And you can’t use the junk fish for bait either because no even the sharks want to eat those things. You may not know this but sharks really do tend to be picky eaters.