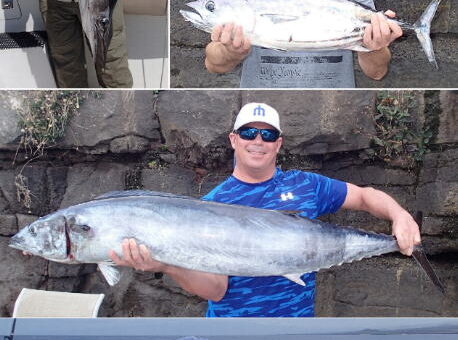 Tourism isn’t up to 100% yet but it’s getting fairly close. One very noticeable change is the behavior of the tourists. The majority of people who go on vacation make at least some plans on what activities they are going to do when they get there. What we’re seeing a lot of is people arriving and then trying to figure out what activities they are going to do after arrival.

It’s true that some businesses that cater to the tourists haven’t’ opened back up yet but most have. We still have some fairly harsh restrictions that are affecting what many activities are allowed to do. Luckily those restrictions don’t really apply to the fishing boats.

The mahi mahi season has started and we’re seeing some around. It’s not ono season yet but they too have arrived. The offshore fish farm, FAD’s and ledges have been seeing a fair amount of ahi, shibi, bigeye, otaru and aku tunas.

In last months report I talked about almaco jack and a few people asked if I kept them to eat or released them and the reason for the question is about ciguatera poisoning. If you are unfamiliar with that term, look it up and ask yourself if eating that fish is worth the risk?

I did some research on cases of ciguatera poisoning in the islands and it’s a fairly low incidence. The Big Island had several reported cases in 2018 caused by what seems to be one incident where they ate giant trevally caught from shore. Kauai, Oahu and Maui have had a few incidents each year and almost all were incidences caused by eating shore caught fish that any local would know that those fish were at high risk. FYI, the majority of local people don’t report ciguatera poisoning. They know what they got. Only if it’s severe enough to get them hospitalized does it get reported.

So, I’m catching the jacks in deep water away from shore. Shouldn’t they be safe to eat? Well, maybe safe-er but by no means risk-free. Between the symptoms of ciguatera poisoning and the time it might take you to get over it along with the severe diet and even the activity restrictions you need to go through for some time after the initial effects of eating that fish are gone, I think it’s best to say NO THANKS!