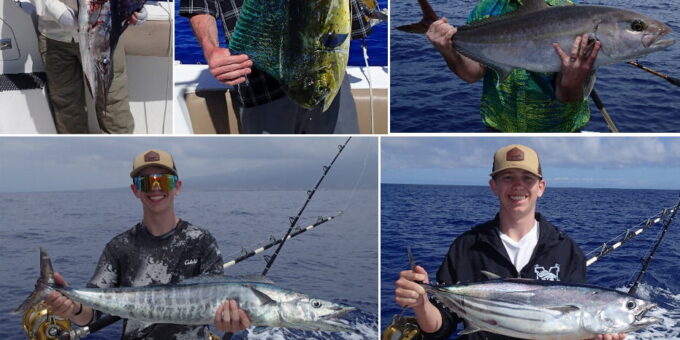 This month has been a wild yo-yo ride. The sea conditions and the currents have been switching all over the place and the bite has been doing the same. Some days when you come in at the end of the day, there’s fish flags all over the place so you know that most boats caught, but the next day, about the only boats you see flying flags are the ones that were left up from the day before. Or, we can have a few days of good fishing followed by a couple of days that it was hard to find anything. It gets that way sometimes.

The blue marlin bite is still doing quite well but the striped marlin bite had dropped off. The spearfish bite has become real good as this is the middle of the peak season for them. They came in a little late so maybe they will hang around longer in the months to come.

There were some nice size ahi caught this month but the smaller ahi bite around some of the fish aggregation buoys really perked up the action, if you could get close enough to them. Once word got out that the ahi bite was on, it was like navigating a parking lot. There have been some tunas on the ledges but that action was also sporadic because of the currents changing so often.

Mahi mahi season has been going nicely but the real surprise was, all of the sudden I started seeing ono flags flying. It’s not ono season but sometimes they show up in the off season. Then you need to start asking, “are they being caught in the deep or close in on the ledge?” It turns out that the bite has been out in the deep so it’s a pretty random bite. A good eating catch but it’s not so nice if one of them destroys one of your good marlin lures.

The bottom bite was pretty good for the first half of the month but then it dropped off drastically. Normally I can count on catching when I go to the bottom. Sharks, amberjack, almaco jacks, snapper, and more but this month wasn’t normal. Again, the currents. Some days the swells were so big in the most productive bottom spots that there was no way I could fish it. Calmer spots had no fish. It gets that way sometimes.