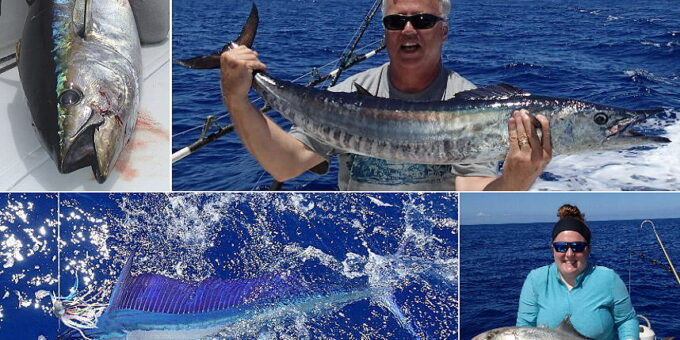 The Kona marlin bite remains good but the “HOT” bite from last month has cooled just slightly. Considering that it’s the current speed and direction that turns the bite on and off here, the current did get wishy-washy this month and the bite could have really turned off but it didn’t. It just slowed a little for part of the month but the current seems to be getting more stable now so June should be really good. Several guys have told me that to get out of the influence of the island, they have been going way off shore. Finding the marlin way out there has been successful for many and there’s been some really big ones both brought in and released. As a side note, by this time of the year there’s usually been at least one marlin over 1000 lbs. (aka grander) caught somewhere in Hawaii. Most years, Hawaii gets the first one or one of the first ones of the year but this year, not a single grander has been reported anywhere in the world. Kona hasn’t seen a “grander” weighed in since 2015 where we had the first of the year and the third. Maui had the 2nd. Both Kauai and Oahu caught granders last year. It’s not that granders haven’t been hooked up, it’s just that a lot has to go right to actually land one. Most big marlin win the fight.

Close to shore, the marlin bite hasn’t been so good but if you’re looking for some eating fish instead of a trophy fish, the ono run (fished very close to shore) has been really good. Mahi mahi are in season right now but few are being caught. There’s been both ahi and otaru tunas coming in and the spearfish bite is on. In the past couple of years, I did really well (better than anyone some people said) at catching the spearfish but this year, not so much. Maybe if I went further off shore? But, here’s why I don’t. No bottom fishing out there.

The bottom bite is almost a guaranteed way to catch fish. No matter what the current is doing, they don’t leave the nearshore ledge, they just find different spots to hang out depending on where the current is favorable for finding food. The worst situation is no current at all. I’ve been running into that this month and that’s highly unusual for Kona but with a little travel time, I usually find out where they’re hiding. That travel time is still fishing time and that’s where I’m finding most of the tunas. Tuna chunks make good bottom bait but sometimes, you’re better off keeping your tuna for the dinner table instead of feeding it to the sharks, giant trevally, amberjack and almoco jacks.