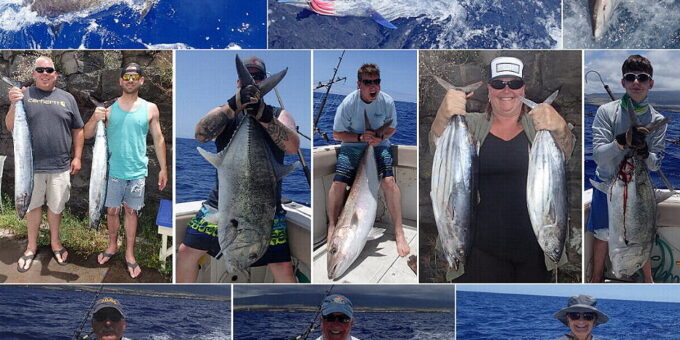 The latest tourism statistic for Hawaii is that tourism is at 75% of the normal average. From my end, it seems like it’s back up to 100%. I’m turning down people looking for fishing charters almost daily because I’m already booked up and I’m hearing the same from the other captains. Our Governor just lifted the outdoor mask mandate and the vast majority of people 16 and older here have been vaccinated. You still need to go through a lot of BS to fly here but it’s looking like things might be back to normal soon.

Striped marlin season is just ending while blue marlin season has just started. There have already been some big blues showing up and the bite overall seems like it’s on track for a good season. This has been the best spearfish season we’ve had in several years and we still have another month to go before that slows down.

The ono bite has also been exceptional so far this season compared to previous years so it might remain good throughout the summer. It’s still mahi mahi season and the bite on those is pretty good too. The “blind strike” big ahi bite really isn’t happening but there are plenty of smaller tunas to be had.

The bottom bite has been excellent and even though giant trevally season technically ended last month, I’m still catching some. The sharks have been brutal though. Pretty much any smaller trevally, amberjack and almaco’s are getting eaten by sharks on the way up. The commercial tuna and snapper guys are having the same problem. Sharks are commonly known as “The Tax Man” and as the way of taxes always goes…… the more they get, the more they want.