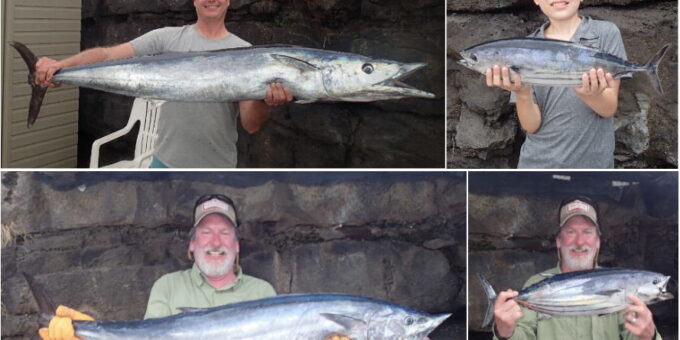 The marlin bite didn’t change much since last month with the exception that some nice size females are showed up. Some were weighed in and some went to the smoker. There should still be a spearfish bite going on but few were caught in May. The season for them isn’t quite over yet so there’s still a chance of getting one.

The “blind strike” ahi bite started right on time. It usually starts in May. Throughout the winter, if you stand any chance of getting ahi while trolling, it’s by working a porpoise school. From May through August, when that line starts tearing off your reel, it just might be a 100+ lb. ahi. Oahu is still having a great ahi bite that has been going on for months now. A lot of the ahi being consumed here on the Big Island is being shipped over from Oahu but the ahi bite is getting better here in Kona. In the summertime, there’s also a nighttime fishery for both ahi and albacore. Some otaru tunas have been showing up. I’ve been eating otaru poke for breakfast, lunch, and dinner.

May is still peak mahi mahi season but there are not many being caught. We should still be catching some through June. I’ve been spending each morning trying for ono with only limited success. Other boats are having the same results. The peak of the ono season starts now so it should pick up. Last summer was one of the best ono runs we’ve seen in about a decade. In the years previous, they showed up early and then basically disappeared in the early summer months. I should know which way this season is going to roll by next month’s report. Targeting ono is my deckhands’ favorite thing to do.

I hardly bottom-fished at all this month. Some of it was a simple lack of opportunity and other times, I just thought that targeting ono or offshore trolling would give us the better shot although statistically, I know that’s not true. Big game bottom fish usually will put an angler to the test but that’s a near 100% release fishery. Yes, it’s fun but it doesn’t put meat on the table. But then again, marlin fishing really doesn’t do that either.