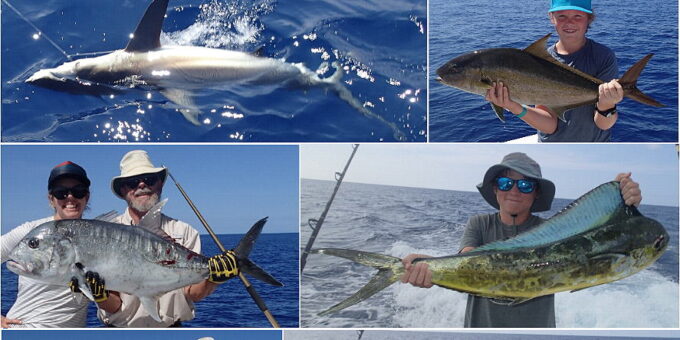 There wasn’t much going on with the marlin bite until just recently. All of the sudden, the marlin bite has turned on. Time to go fishing… only one problem for me. My boat is down and I’m still waiting for parts 🙁 I’ve been down for almost 2 weeks. There aren’t a lot of tourists here but we did have an influx of tourists that came in for the Iron Man competition. Hardly any of those people go out fishing though.

The otaru tuna schools are still popping up all over the place so that’s the top bite of the month. Not many big ahi were caught this month. There’s been very small ahi and aku (I mean VERY small) on V V buoy. Too small to mess with for eating but they make great bait.

Ono season is over and gone and it’s now mahi mahi season and so far, it’s been pretty good. Some “floaters” were found this month and they were loaded with small ahi, mahi mahi and even some ono. Just in case you are wondering what a “floater” is, it’s any kind of debris that’s floating around the ocean. It could be wood, rope, netting, floats, or any other interesting object that floats. The longer it floats around, the more marine growth it collects, and the more fish of all sizes are attracted to it. It’s a whole aquatic food chain drifting around the ocean. When you see pictures taken here with multiple catches of mahi mahi, it’s usually because they found a floater.

The bottom bite was quite productive because of all those small tunas that were easy to catch around V V buoy. I just picked up half a dozen or so and headed to the bottom fishing grounds. On most trips, it was fast action with a variety of fish biting. It was nice catching more than just sharks this month but the sharks were also around and trying to eat anything on the line that wasn’t already a shark. Almost everything we brought up that wasn’t a shark, got attacked by a shark on the way up. Sharks are fun to catch but as the saying goes, “variety is the spice of life”.