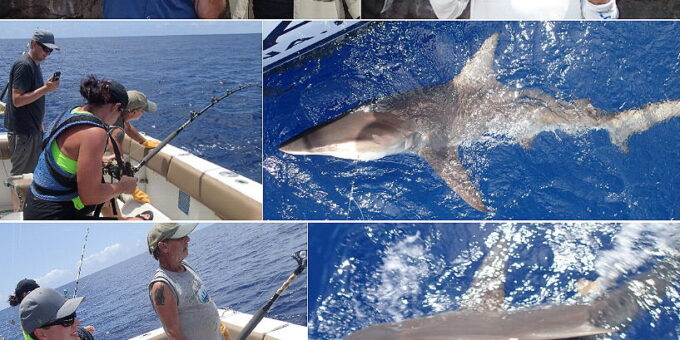 It’s always hard to report on the September bite because there aren’t many boats going out because September is the slowest month of the year for tourism. From what I gather, the marlin bite stayed about the same as last month. Not really good, but not bad either but the catch sizes are all over the place. We have some very small ones coming in, some medium sizes, and some monsters. I lost two good lures to monster marlin this month. There’s some striped marlin mixed in and even though it’s typically the slowest season for them and there are still some spearfish being caught.

The ahi bite has slowed but I think overall, there’s still a bit of a bite. There are skipjack tuna schools popping up all over the Kona coast. The smaller “aku” are schooling together and the bigger “otaru” tunas are doing the same. Sometimes you see them mixed in together busting the surface but the otaru tunas are very fast movers so the smaller aku just can’t keep up with them.

The ono bite was pretty good this month as the season for them comes to an end. I’ve been spending the first hour or so of my trips in ono lane. I’m getting bites on most trips but not having much luck getting them to stay on the line long enough to get them into the boat. It’s the beginning of mahi mahi season and so far, it’s looking good! It will only get better from here.

The bottom bite was all sharks. Galapagos, sandbar, and oceanic blacktip. There are so many sharks along the ledge that anything I hook up that isn’t a shark is instantly eaten by sharks. It went into effect on January 1st that it is illegal to fish for sharks because dumb politicians fell for the lie that all sharks are endangered. I’m not “fishing for sharks” but the fact is, any bottom fishing here is likely to end up being a shark encounter. It wasn’t that way a dozen years ago but now days, there are way too many sharks here in Kona.